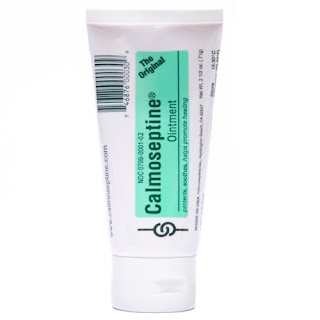 Diaper rashes are something that cause issues for every mom at one time or another.  A couple weeks ago I posted a recipe for my diaper rash balm that works like a charm.  However, I know that not everyone has the desire to be mixing their own lotions and potions, and for that reason I wanted to offer another recommendation for a non do-it-yourself version of a diaper rash ointment that I have found extremely effective.
A while back my little boy Hudsen went from having no diaper rash at all, to a few hours and a few poopy diapers later having a bum that was flaming red and bleeding!  I wasn't feeling well at the time, and had run out of my homemade diaper rash ointment a while back, and hadn't made anymore because I hadn't been needing it.   But suddenly I had a very sore little bum, and a baby that would scream every time he got his diaper changed from the pain.  I had a stash of diaper rash creams that various people had given me for baby showers etc.  I tried everything from the traditional diaper rash creams off the shelf at Walmart, to the natural Burt's Bees balms, but nothing seemed to sooth or heal it up like I was used to with my homemade creams.  I causally mentioned to someone one day that I HAD to get some balm made cause nothing was helping my baby, but I just hadn't felt well enough to make any yet.  She then proceeded to tell me about this cream, that I could get at the drug store next door, that wasn't made for diaper rashes, but worked like nothing else she had ever seen.  Desperate and willing to try anything, I ran next door and bought the only tube they had.
Glancing at the ingredients, I saw it had menthol in it, and thought "oh dear this is never going to work!  His bum is so raw the last thing he needs is MENTHOL on it!"  But, the gal was so insistent that I decided to give it a go.  I had a wash cloth ready and waiting, thinking he was going to scream when I put it on and I would have to immediately wipe it all off.  But to my surprise he cried for a few seconds as he had been doing when I changed his diaper, then stopped.  And every time since then that he has had any type of sudden severe irritation it soothes SO well!

So, that being said, if you aren't in the mood for mixing your own concoctions, but want a diaper rash cream that is heads and shoulders above any other cream I've tried, THIS is the one!  You can get it at some pharmacies, or you can order it off of Amazon.  I've posted a link below so you can either order, or get a good look at the product so you can find it locally!

That's all for today!

Posted by Harebrained Thoughts at 4:03 PM